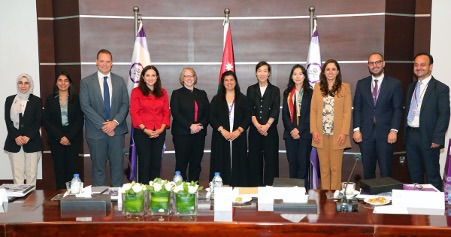 The Royal Scientific Society established a Chemical, Biological, Radiological, and Nuclear (CBRN) Threat Office whose mission is to promote scientific and technical collaboration in the CBRN field. Through the development, facilitation, and implementation of impactful programming, the CBRN Threat Office works with national, regional, and international partners from government and non-governmental organizations to promote research and best practices in CBRN risk mitigation.

On Monday, September 12, 2022, with the participation of HRH Princess Sumaya bint El Hassan, the CBRN Threat Office held its first Advisory Board meeting by hosting high-level delegations from South Korea’s Korea Institute of Nuclear Non-Proliferation and Control (KINAC), the Organisation for the Prohibition of Chemical Weapons (OPCW), and the United States’ Department of Energy and Sandia National Laboratories. The members of the Advisory Board first met Jordan’s national stakeholders representing different government, military, and non-profit organizations to learn more about the CBRN Threat Office’s 5-year strategic plan and to identify mechanisms to collaborate on programming that will advance the application of CBRN sciences and related technologies that match the government’s safety and security priorities. It was confirmed that the activities of the CBRN Threat Office will focus on identifying and mitigating the CBRN risks threatening the region’s communities through developing comprehensive safety and security strategies underpinned by legislative, human and physical infrastructure to build healthier and more secure communities capable of facing upcoming challenges.

Dr Nisreen AL-Hmoud, the Director of the Bio-Safety and Bio-Security Centre at RSS that houses the CBRN Threat Office, stated that “The members of our Advisory Board represent the most advanced international institutions operating in the CBRN field. The positive feedback and their support to expand our work together means that we will continue to have the tools, expertise, and insight needed to maximize the impact and sustainability of our programming in support of the safety and security of our country.”